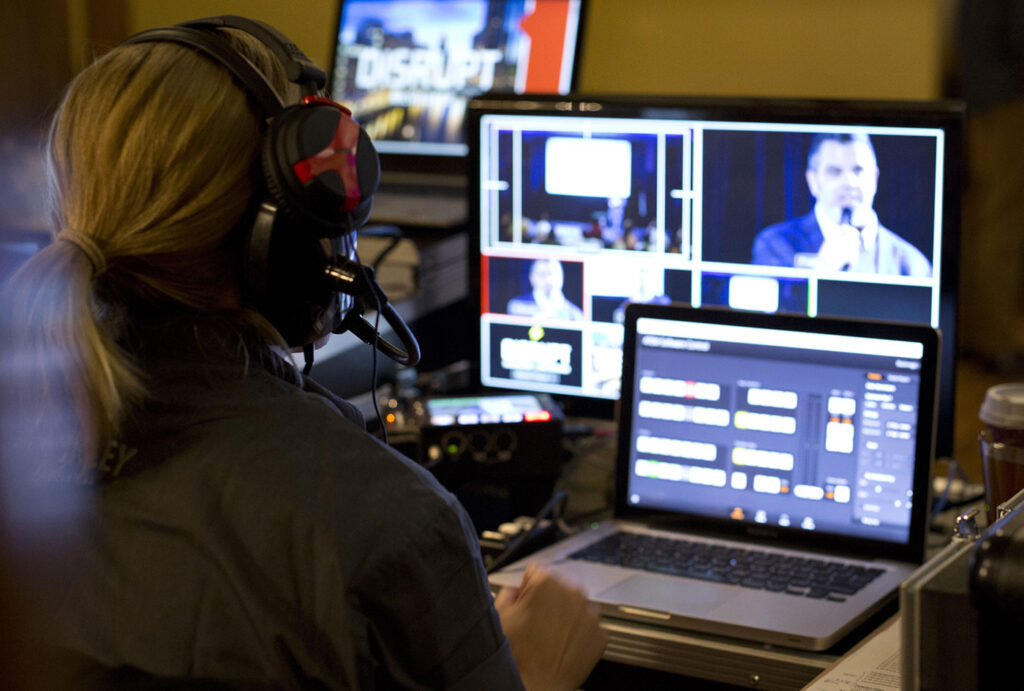 After a number of years producing Disrupt events for Madison live stream and video production, Hinckley Productions teamed up with Disrupt to expand its reach to Milwaukee. The chosen venue, The Best Place, was a new and exciting space, wowing us with its sweeping stained glass windows, fully trimmed wood floors and gorgeous ornamental carving. A historic Pabst Brewing building, the space set an impressive stage for the event.

What I enjoyed most about this shoot was the way in which we came together as a team to produce a rich variety of video production offerings all at one event. We tied together video production to an in-venue viewer experience (sound, lighting, staging, a large projection screen and supporting LED TVs) alongside a virtual live stream viewing experience. The two audiences were unified on Twitter where conversations discussing the content of the speaking series converged. Additionally, a dedicated team captured interviews for the client, creating content for them to leverage for future promotion.

EQUIPMENT FOR THE JOB

Our job was to bring an AV experience that would compliment the room. We partnered with Madison Pro Audio, who managed all sound mixing and amplification in the venue as well as staging and lighting. Planning together, we decided where we could set up screens and TVs that would yield the best viewer experience. A single large screen was placed behind the stage, while two 60” TVs were also included in the layout. One was placed next to the stage, playing back a visual of the live stream. This allowed the audience to experience what the online viewer was seeing, while also providing supporting close ups of speakers. The second screen was placed in the lower level speakeasy bar, so those sneaking away for a drink wouldn’t miss out.

Two settings were also used for interviewing. For those requiring a quiet, intimate feel, we arranged the adjoining rooms off the main hall with lighting and set. Others were interviewed on the floor of the event, capturing the vibe of the evening and lending excitement to the event as a whole.

Equipment setup and live stream testing occurred the day prior, ensuring a smooth and seamless event for the live show. Speakers were also able to rehearse and get a feel for the room. On the day of the event, with systems loaded, our eight person team came together and nailed a successful evening. The crowd had a blast, everything went according to plan, and Disrupt was delighted with the visual impact brought by live streaming.