The Substance of Sincerity

At the beginning of the year, we became our own client, creating an ad for Hinckley Productions.  Embarking on this latest project, I was interested in having sincerity take center stage. A bit conceptual, really. I mean, what does sincerity actually look like on camera? It’s like asking what honesty or dependability looks like. We know how it feels, and how it’s conveyed through words or actions, but a single visual representation? That can get a little obscure.

By boiling the idea down to its most elementary qualities, we decided we could successfully present the pith of sincerity. We invited a bevy of friends, new and old, to come in and simply be themselves in front of the camera. No posing, no acting, no lines read. Rather, we searched for an essence within each person, capturing it from a slight smile, a big laugh, or an introspective moment of calm. A straight ahead shot with a clean background was used to distill a subtle, yet profound genuineness. What a joy it was to see those earnest moments gleaned from people I have known for decades, and in those whom I had just met. To them, it might have simply felt like a few minutes in the studio, but I was seeing their spirit at work. Honestly, it was somewhat of an honor. I was witnessing the collection of their life’s every twist, jag, detour and revelation up to this point. In one moment, we were presented their every path, carved by default and design. I’m going to venture to say, it was sincerity made tangible.

Following the tightly framed shots of diverse, distinct faces, we relied upon a dolly track and jib to ariel out and reveal the “wheels at work”: the set, equipment, director, sound engineer, production assistant, make-up and hair stylist, producer – the whole shebang! With all the parts moving, we are offered a symbolic look behind one person’s story, the multiple tiers that embody a life’s experience. We rented out Radlund Studios to use their cyc wall, brought in the dolly and jib from Red Star Pictures, and set up our own Sony FS7, creating an impressive scene. After ironing out a technical issue (it’s amazing how a simple bump on the floor can create a bump in the road!), we had a great time experimenting with the possibilities the jib allowed us. Ultimately, the vision of starting with the model’s face then expanding up and out was executed perfectly, giving me the very shot I had hoped for. With the final shot created at Radlund and the individual shots done at Hinckley Productions studio, the technical challenge was matching the lighting to create the illusion it was all done at one location. With the keen eye of director Natalie and the finesse of our editor, Portia, the challenge was flawlessly met!

When you’re a company always digging for the marrow of a story, it’s interesting to turn the camera on oneself. Without sounding too schmaltzy, in finding the heart of another’s story, you find your own. Mushy, but true! Your genuine desire becomes acknowledging the unique and endless layers of a person’s life and weaving their experience through a narrative. The outcome? The visually abstract concept of sincerity, presented in simple black and white. 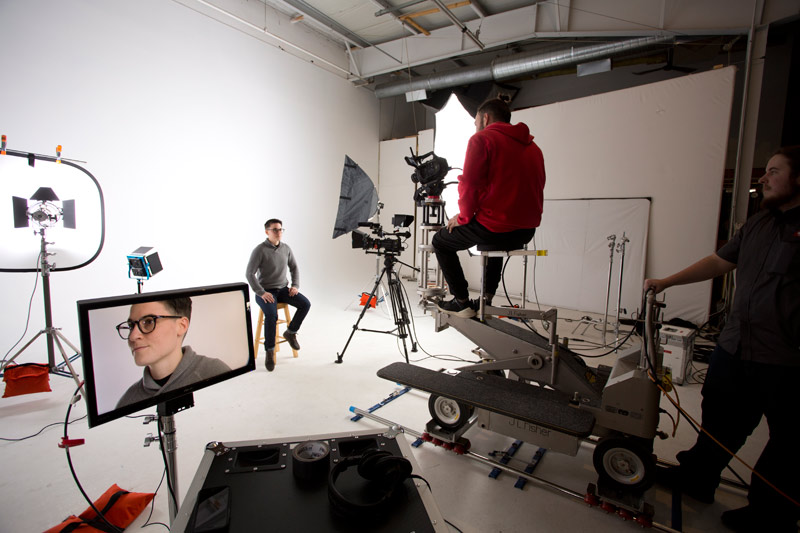